Campus Life
Remarkable Warriors
The Warrior Way is a set of values based on the vision of Liberty Christian School and characterized by a central focus on Christ, wrapped in academics and co-curricular pursuits.

Our students exhibit the Warrior Way daily on and off campus. Below are highlighted students who have displayed a true picture of living out the Warrior Way by embracing God's Truth, demonstrating leadership, striving for excellence, valuing scholarship, exhibiting Christ-like character, pursuing service, and building community.

At Liberty, we believe students aren't just students, they are mind, body, and soul capable of marvelous achievements. Our students are Remarkable Warriors!

Do you have a Remarkable Warrior story to share? Please email the student's name and details to communications@mylcs.com.

Paying it forward-Liberty Senior Madison O’Rourke turned her struggles into triumph when she started the Shaping a Better Future Fundraiser to give back to Scottish Rite Hospital and help underwrite the cost of care for children with scoliosis.

Madison worked hard to overcome her struggle with scoliosis for nearly ten years, and as a senior went on to compete at state for track, and has been a volleyball district champ for two years. Madison said she would not be where she is today if it weren’t for Scottish Rite Hospital.

"I use my scoliosis journey to encourage myself that when I feel defeated, I still have fight left in me.”

Madison presented a check for nearly $50,000 to Scottish Rite Hospital in September-greatly surpassing her fundraising goal. We're proud of you, Madison! 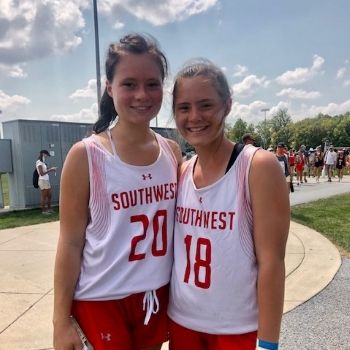 Ava and Anna Claire Kristynik excel at a sport uncommon in Texas. A combination of basketball, soccer, and hockey, lacrosse is considered the first sport in America and requires strength, coordination, and, like most sports, an incredible amount of discipline.
Despite being one of the fastest growing team sports in America, lacrosse is considered a nontraditional sport in the Southwest. Both Ava (Senior) and Anna Claire (Freshman) received special recognition this year for their lacrosse talent, and are proud to represent Liberty in their achievements.
This year, Ava and Anna Claire were selected by a panel of judges and experts to play in the All-American Underclass Games, the most prestigious high school tournament of the summer. The sisters were chosen for teams representing their graduation year in the Southwest division and traveled to Indianapolis over the summer to compete against other divisions. Ava’s team won the championship and advanced to the National Championship in Virginia Beach, VA.
Ava has verbally committed to play for Notre Dame next year and was named an Adrenaline All-American, a prestigious award given to the top 60 players from the West by the Adrenaline Evaluation Team for outstanding talent, leadership, and collegiate lacrosse achievement.
As an Adrenaline All-American, Ava will have the opportunity to compete in the All-American Game in Frisco, TX next summer, a nationally broadcasted game highlighting the top western lacrosse players.
Ava and Anne Claire embody the characteristics of The Warrior Way both on and off campus by striving for excellence in their athletic pursuits. Their outstanding achievements and national recognition is evidence of their hard work, discipline, and leadership in the sport. Ava and Anna Claire, you are Remarkable Warriors!